The North Carolina Literary Hall of Fame celebrates and promotes the state’s rich literary heritage by commemorating its leading authors and encouraging the continued flourishing of great literature. Inductions are held every other year. A list of inductees, as well as samples of their work and video clips of past inductions, can be found online at www.nclhof.org. 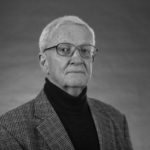 Jim’s literary scholarship has included editing Thomas Wolfe’s The Lost Boy: A Novella, published by UNC Press in 1994, the first unabridged, non-serial publication of this work.

In 1999, in recognition of Jim’s many services to NC State the University’s Board of Trustees presented him the Alexander Q. Holladay Medal, which is given for professional excellence. More recently, in 2012, he received the University’s William C. Friday Award for Distinguished Service in Retirement.

Dr. James W. Clark, Jr.: “I’m honored to be part of a group of faculty and staff at N.C. State University where, in the land-grant spirit of education, we extend the culture, including literary culture in all forms and media, to our citizens of all ages, on and off campus,” Clark says. “Teaming up with writers and videographers and being a writer myself, I have been fortunate to be part of N.C. State University’s mission. We have whole-heartedly supported the N.C. Literary Hall of Fame since its opening in 1996. I accept the honor of my induction for many of my colleagues, some of whom are no longer alive.”

For more information, visit the NC Literary Hall of Fame at www.nclhof.org or the North Carolina Writers’ Network at www.ncwriters.org.